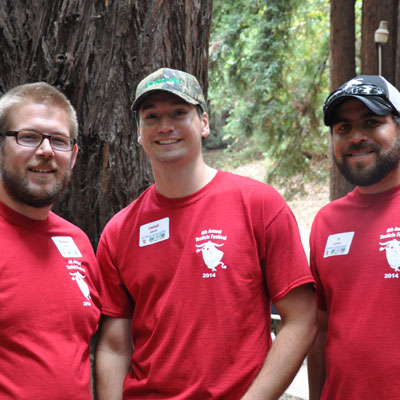 It was announced that Tony Colee of Redondo Beach won the “It’s All in the Sauce” contest at the 6th Annual Testicle Festival held in Watsonville on Saturday, September 20th. The contest invites attendees to prepare and bring their favorite dipping sauces for everyone to try out with the Rocky Mountain Oysters served as appetizers. Tony’s sauce was the favorite of the 16 sauces entered in the competition. Emily Youmans of Watsonville won the coveted “Best Sauce Name” section of the contest. Emily’s sauce was appropriately named “Ballapallooza.”

There was also a competitive horseshoe contest at the Testicle Festival. The winning team was comprised of Arnett Young and teammate Dan Legard.

All contest winners were presented with plaques memorializing their triumphant performances.

The Young Farmers and Ranchers Committee of the Santa Cruz County Farm Bureau held its 6th Annual “Testicle Festival at Estrada Deer Camp in Watsonville. The Rocky Mountain Oysters were served as hors d’ oeuvres and the sauces were enjoyed and judged by the record-crowd attending. A full chicken barbeque was served for dinner, with s’mores, made around the campfire, for dessert. The event also included a raffle, live and silent auction.

If you haven’t tried a rocky mountain oyster, make sure to attend the 2015 event!