Highlights of the 96th Annual Meeting of the Santa Cruz Farm Bureau. 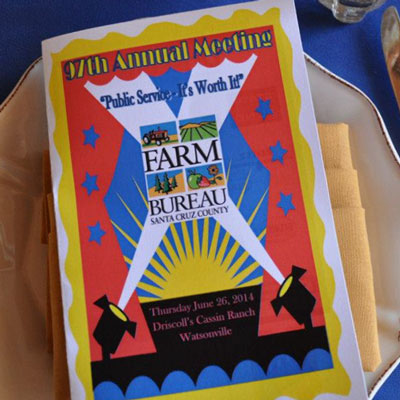 John E. Eiskamp has been selected by the Santa Cruz County Farm Bureau as the 2014 “Farmer of the Year.”  This award is presented annually to the farmer(s) who have contributed beyond their normal farming duties to help the community. The presentation was made during its 96th Annual Meeting held Thursday, June 26, 2014 at Driscoll’s Cassin Ranch in Watsonville. The board of directors felt it was appropriate to honor John who serves on the Farm Bureau Board of Directors and has made significant contributions within Santa Cruz County and the Pajaro Valley.

Other activities of the Annual Meeting included the election of directors and officers:

There are a total of 19 directors on the board and all terms commence on November 1, 2014

For President and State Delegate, two-year position, we nominate:

For Past-President and Alternate State Delegate, two-year position, we nominate:

Click here to see all photos from the event